I think one of the areas where our department has the most to improve is testing. We had a couple of regressions lately that seem to prove the point that a more robust testing scheme must be put in place. That is the reason why I decided to focus my first day at the Agile 2009 Conference on Agile testing.

I attended a presentation by Janet Gregory called "Using the Agile Testing Quadrants to Plan Your Testing Efforts". Right off the bat, in the five first minutes, I realized that the presentation was intended for a testers audience! That reminded me that software teams usually have both developers and testers. At this point I got in a discussion with the people at my table about the developer/tester ratio. For most of them, the ratio was between 2 and 4 developers for 1 tester. Another interesting point is that some companies have a separate Scrum team for testers.

The "Agile Testing Quadrants" themselves (from the title of the presentation) are a way to classify the tests according to different dimensions. The diagram from Janet Gregory's presentation is probably the best way to explain this: 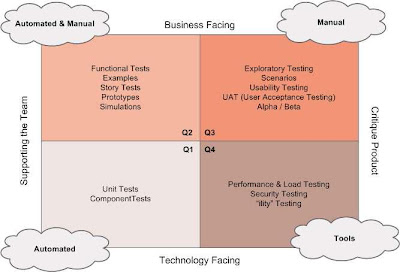 Some tools were mentioned by the presenter (mostly for web development though):